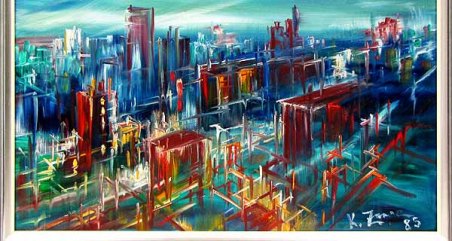 “If you open a modern computer case and stare at the mother board, it really appears like downtown Detroit” (the image above is aptly a painting by computer pioneer Konrad Zuse).
This insightful comment by a friend of mine conceals a bigger truth, which is best revealed in a passage of “Robot” by CMU robotics maverick Hans Moravec (of Moravec Paradox fame), interestingly named “Community life and chipped silicon”.

There is positive correlation between the size of a community which an individual is part of and the size of his(her) brain, in terms of cerebral connections and apparatus. Naturally, the existence of a community larger than one which can be handled by our brain circuitry, leads indeed to the birth of hierarchical structures, which are best represented in political and economical stratification, i.e. layers of command.

This can also be read in connection with an observation of Daniel Dennet in “Breaking the Spell” (see Micromega, Almanacco Di Scienze, 2009: Girotto/Vallortigara in Italian) whereby it is the darwinian evolutive process that assigns a premium on any belief system which is agent-based. The existence of an external God is just a natural projection of the increasingly complex social structures we live in. Ludwig Feuerbach in disguise. Another variation of classic Commodity fetishism.

Like Loading...
‹ Artificial Photosynthesis: some social implications of technology
Problems with the Objective Function: the Monkey Pawn ›