The famous painting by Bosch “The Conjurer” depicts an example of a cognitive fallacy of the human being, 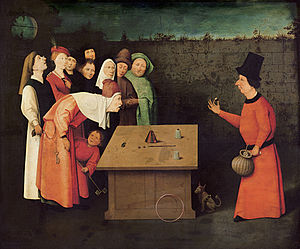 which is shrewdly used by the “magician”. This is an instance of “Freud’s Problem” to use Noam Chomsky’s very pregnant category, i.e. why do we know so little when we are exposed to so much signal. Surely an animal would not have allowed that, it would have not trusted anyone to come so close as to rob it.  So take Nim Chimpsky, the chimpanzee taken from its mother at birth and raised like a human child by a family in a brownstone on the upper West Side in the 1970s. (see also the documentary Project Nim): he (he?) will not learn to speak, no matter

how much signal was given to him (sic). So how is it possible that we -as opposed to Nim Chimpsky- know so much given that we are exposed to so little signal (“Plato’s Problem”, again in the parlance of Noam Chomsky)?
Are the two problems – the fallacy depicted by Bosch and the miraculous capacity of the human infant to learn language – related?  Here is a way to argue.

Chances are that it is the very transfer of sovereignty by the human being, which grants to an external hierarchy of people some power when his(her) brain cannot handle anymore a group that has grown too big, that which creates the fallacy depicted by Bosch. The fact that we have a social structure unique among living creatures (eusociality in the parlance of Edward Wilson, “The meaning of Human Existence”) is of course linked (should be) with the fact that we granted symbolic power to hierarchies of external agents. The magician will not deceive a bear, as the bear will not let him close: he has no concept of sociability. This is the bear’s (short-term) advantage (against the conjurer) but also its (long-term) trap.
Compare this rumination based on a remark by the great CMU robotics expert Hans Moravec in “Mind Children”. To conclude the argument, though, we should be able to explain not only how the “Freud’s Problem” is linked (negatively) to sociability, but also how “Plato’s Problem” is linked (positively) to it: which is less trivial. See this paper.

Of course, it is exactly this symbolic transfer that gives a premium to any conscious agent vs. a purely random phenomenon in our decodification of the world. Think about the early Homo Sapiens walking in the savannah and hearing a crack from some tree: interpreting that as a random event must have been evolutionary discouraged by even a single occurrence of the event “it is a lion”. So the agent-based fallacy takes root (Daniel Dennet’s “Breaking the Spell”) and from there on religion and other superstructures are just a step away.