Home › Chomsky › “To enquire and to create”

“To enquire and to create”

There used to be an old concept in classical philosophy, the concept of the full and meaningful life, creative and inquisitive. German classical philosophy recovered that from the ancient Greek civilization, in particular from Ⅴ century Athens. Unfortunately, that was a hugely unequal society, where a minority of optimates could freely dispose of most of the other’s time and lives. The modern world put an end to this non-sense, with obvious repercussions (see here). Marx’s “Entfremdung” concept grew out of his acquaintance with Hegel’s reflections on classical Greece, and the perceived cultural inferiority of the modern world against the old polis. Can we recover the lost integrity of classical society in the industrial world which is obviously based on the division of labor? This is Marx starting point. Similar reflections were voiced earlier by Wilhelm von Humboldt 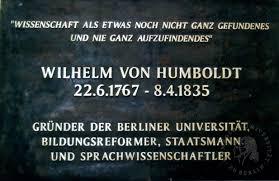 one of the founders of modern higher education, which he based on a concept of humanity closely related to the ancient civilization paradigm (Paideia). The birth of Germany’s Bildung is here. The following excerpt from “Limits of State Action” (1792) is very explicit.

“To inquire and to create, these are the centers around which all human pursuits more or less directly revolve.” “But all moral cultures spring solely and immediately from the inner life of the soul and can never be produced by external and artificial contrivances. The cultivation of the understanding, as of any of man’s other faculties, is generally achieved by his own activity, his own ingenuity, or his own methods of using the discoveries of others.[…] Man never regards what he possesses as so much his own, as what he does, and the laborer who tends the garden is perhaps in a truer sense its owner than the listless voluptuary who enjoys its fruits. And since truly human action is that which flows from inner impulse, it seems as if all peasants and craftsmen might be elevated into artists, that is men who love their labor for its own sake, improve it by their own plastic genius and invented skill, and thereby cultivate their intellect, ennoble their character and exult and refine their pleasures, and so humanity would be ennobled by the very things which now, though beautiful in themselves, so often tend to be degraded. Freedom is undoubtedly the indispensable condition without which even the pursuits most congenial to individual human nature can never succeed in producing such salutary influences. Whatever does not spring from a man’s free choice, or is only the result of instruction and guidance, does not enter into his very being but remains alien to his true nature. He does not perform it with truly human energies, but merely with mechanical exactness. And if a man acts in a mechanical way, reacting to external demands or instruction, rather than in ways determined by his own interests and energies and power, we may admire what he does, but we despise what he is.” (W. von Humboldt, “Limits of State Action”)

Enter Chomsky now. His wavelength is the same.
In “Government in the Future”, Noam Chomsky outlines the core ideas of a plan which, in his own words, puts the burden of proof on the shoulders of authority.

The problem that Noam does not appear to discuss in his long talk is (of course) the Division of Labor and the specialization that it implies. It is not clear to me whether a technologically advanced society can do without.

Like Loading...
‹ “The Look of Silence” and Antonio Gramsci
“Galileo was no idiot” (or “Wir werden wissen”) ›