The Egyptian Pharaoh Akhenathen invented the first historic monotheism, according to Freud’s Moses and Monotheismus (1939). Sensibly, the sun was the God, worshipped as 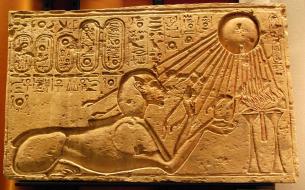 the true generator of life in this planet. Everything we have depends on the constant flow of solar energy. Animal life (human life being a subset thereof) is but a parasite of plant life, which in turn derives its energy from the Sun. The old pharaoh was ultimately correct, if prescientific.
Now, at University of California in Berkeley, it appears that they have managed to artificially reproduce the process of photosynthesis. Or, in other words, to make Diesel fuel out of

and sunlight, see here.
Princeton physicist Freeman Dyson, in The Sun, the Genome, the Internet mused over the demographic problem of overcrowded cities and its possible solutions. Gentrification for rural areas, if cheap fuel is available, would be an easy answer.
Historically the transition to big cities happened as the economics of large concentrations of people drove ever more people into large agglomerates: btw, the steady loss of economic function on the part of smaller towns was also the reason why they retreated into themselves, thus becoming “provincial” and ultimately parochial (see Eric Hobsbawm, “The Age of Revolution”).

The availability of cheap fuel (because of artificial photosynthesis) and the possibility of locally engineering the components of production (via 3D printing and Internet) could reverse the historical process of big concentration of people in cities thus making most of the planet suitable for advanced life-conditions.

When in Brazil they produce ethanol out of crops, they are ultimately using plants as a (non-linear) black-box to store the flow of energy coming from the sun. The net efficiency is very low. What if we could engineer processes to make that efficiency higher (via artificial photosynthesis f.e.) and thus have plants that produce diesel fuel, say, just out of thin air and (free) sunlight?